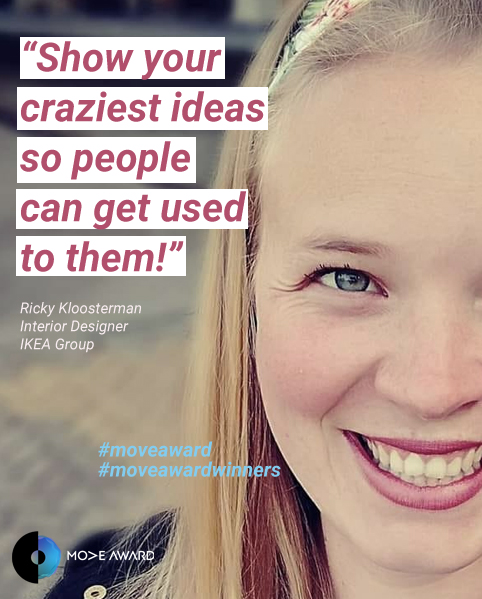 Interview with Ricky Kloosterman – Move Award Winner 2014. Won an internship at BMW.
Education: Design Academy EindhovenHow did you find out about MOVEAWARD and what motivated you to apply?Move awards was an assignment from our academy. It was part of our education and we had to incorporatethisassignment into our trimester. I have to say that my submission was quite out of the box, but that wasexactly what made me stand out of the rest and why I was chosen. I was allowed to go to the Milan for theSalone del mobile to receive my prize and afterthat I got the opportunity to do my internship at BMW.How did the move award influence your career?It was really cool to see how a large company like BMW works, where they get their inspiration from, but alsohow BMW sees the future. Large companies have a major influence on our future. They partly determine whichway we go in society. I always take this vision and the things I learned at BMW with me.What is your profession at the moment and what are your goals for the future?I now work as an Interior designer at IKEA. Here too, themes such as to create a better everyday life for themany people and sustainability are big topics. I like to see how big companies are heading in this newinnovative direction.Who or what inspired you to pursue a careerin design?When I won the MOVEAWARDS I also got a subscription on the Stylus website. There are really cool webinarsand blogs on it for inspiration. Furthermore, I sometimes really take the time to go to museums, to Salone delmobile or to the Dutch Design Week. These are events that really give me so much energy and inspiration! AndI also get inspiration from the smallest things in life around my house or in nature.What is your tip or message to future MOVE candidate’s?Be as innovative as possible and think outside the box. The challenges for the future lie only in innovation.Show your craziest ideas, so that we can all get used to them. In a few years’ time, we may not think thesecraziest ideas are such a crazy idea at all and there might be part of your design in one of the new concept cars.Go for it! I am still happy that I was able to do an internship at BMW and that I was able to look behind thescenes! Very greatfull for this opportunity. for more about Ricky Kloosterman go: